BY far my favourite, and the one I was most excited for leading up to it. On the morning of my 24th Birthday, at 5.25AM, an Indian man dressed in dungarees, donning an overgrown moustache, picked us up. We drove 36-minute to the take-off site, where the largest Hot Air Balloons in the world are being inflated, glowing in the predawn darkness. Although still dark, the world of Dubai is still lit and roads still busy, we can see filtered bits of light looming in as birds awaken and stir. It’s just before sunrise, and we take off to meet the sun as it rises over the Arabian desert and the sky fills with light. Early morning provides the best flying conditions. The tent is filled up with hot air using a burner, which somehow manages to get bucket loads of sand all over us- so wear a hat. The shower of sand only lasts whilst you’re on the ground- don’t look up during lift off or your teeth take a grit bath and your eyelashes are coated in a blanket of fine granular rocks.

Its crazy early, the air is still frosty, the clouds above look like their clearing a path for the sunrise.

Miles and miles of barren land around us, the sea of sand looks like an endless horizon, stretched as far as the eye could see. We are in the middle of nowhere. Wind had flung the sand dunes in the distance from one area to another overnight, and now looked pristine and unspoiled. Or perhaps that was the way the lighting hit it from the side. It was all rather miraculous to observe, and after some selfies… we went all aboard and made our ascent to the heavenssssssss!

The balloon itself can hold 16 people, goes up 4,000 feet in 20 minutes and depending on the skillset of the Pilot, can be a bumpy ride or a smooth one. We had Chief Pilot Peter Kollar navigating, whose personality has by far a life of its own. He was loud, social, kept us laughing and entertained throughout the flight.

There’s something about being up amongst the clouds, and not having a barrier to stop you from reaching out and crushing the pillows of white air around you. You see this view from a plane window, or on the 95th floor of the Shard. but your always separated. Glass. It’s always a distant view, an untouched canvas of undisturbed peace. On the other side of something. As though human race is being denied the destruction of the last bit of nature god created. As though its for its own protection. We tend to destroy anything we have access to- the land, the sea, oxygen, jungles, deserts. Its only right that this is restricted. But one thing I know, is that it is stunning beyond words. 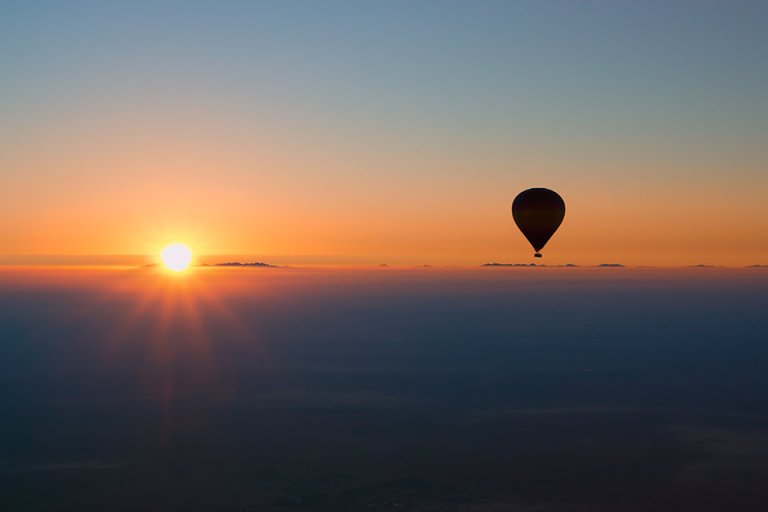 Early sunrises & raw beauty. The cool and serene ambience enhances the breathtaking views and incredible desert landscapes. I’m still mesmerized, I’ll be honest. Two balloons took off, and by default, we got the faster, cleaner and longer one. Peter flew high first, and then came back down for what he called a “magic carpet” ride. He flew low –down to 1,000 ft from the ground, and we spotted roaming camels, herds of gazelles running across the pristine sand dunes and even one of two Arabian Oryx in their natural habitat- a great source of national pride for the UAE. He made it a point to let us know that it’s the national animal of the UAE and the namesake of many businesses.

My full entourage couldn’t make the early morning thrill, but it was so rewarding to see my three friends faces glow up in the sky. They were seeing another side to life, something they were not used to seeing, and it was rewarding to watch them enjoy it. The actual flight time is approximately one hour, but the experience lasts around 3 hours in total. I dressed in a large FILA jacket to stay warm, and paired them with jeans and Jordan cap. Your required to dress casual and comfortable- no dresses, heels or uncomfortable clothing. I thought it would be cold for so early in the morning, but the burner is so close to the basket that your kept fairly heated for the duration of the flight. A t-shirt is sufficient with a loose windbreaker. 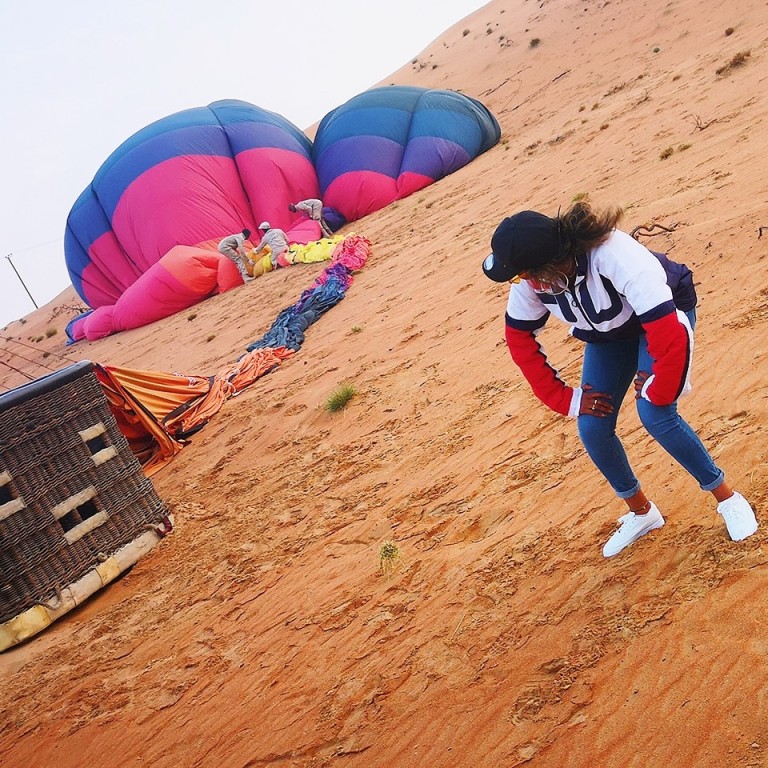 1 hour and 10 minutes in, a few 360 spins mid air for a panoramic view and some grateful moments later, we practised the bracing positions and second time in, we landed. With the morning sunrise kissing our faces, we made our way to the camps.

CHECK OUT THE VIDEO BELOW:

Have you ever tried this? Would you ever? Whats stopping you? I want to hear it all! Leave a comment below!