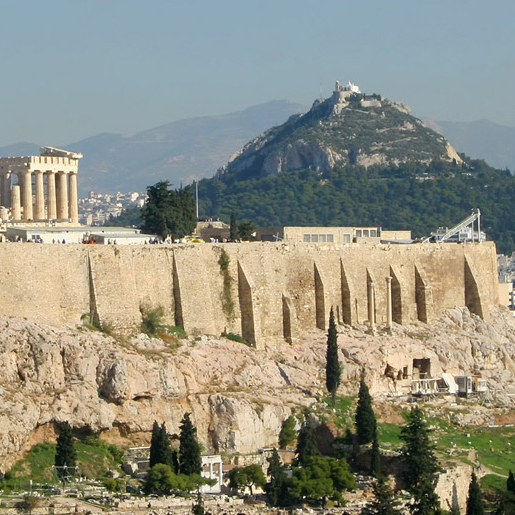 Arriving in Athens this morning, my last flight into Thira wasn’t for another six hours. In my world, instead of booking a hotel, dropping my bags and staying in close vicinity to the airport… I went straight into the city to explore. Time not on my side, this is my 6 hours in the ancient city of Αθήνα (Athens).

After arriving at the International Airport at roughly 11:40am, the taxi service from Exit 3 took me directly to the city’s centre for a mere €35. From there, first stop was the famed Ancient Agora. The marble structure still standing provided shade from the punishing sun, and the site was oddly heaving with people for a midday Saturday. Tourists and their children and their grandchildren walked around aimlessly in shades and shorts, in stark contrast to me who lugged a carry-on suitcase and donned a heavy black jacket. The sun wasn’t proving kind to me at all. 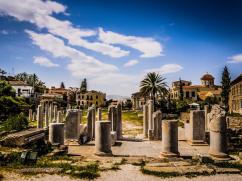 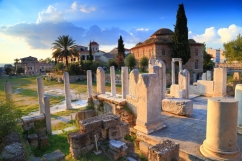 A flock of what looked like American tourists, around 18 of them by eye count, were taking a tour around the ruins. I joined them, smiling. The American voice on the microphone told us about how every ancient city has a place called an ‘agora’, the word defined as an assembly of people and by extension, means the ‘gathering place’. She told us that the site had gone through countless deconstruction and rebuilding cycles, and had served as an Iron Age cemetery, library of Pantainos, a Basilica, gymnasium for the Herules and a roman Stoa. Quite the history.

Today, the pillars of Hephaisteion stand intact without its arched ceiling, and its columns riddled with holes that appear to be from bullets. The round large foundations of Tholos are still visible, and the voice on the microphone tells us it served as the headquarters for the 70 executives of the Boule- “The council of Citizens”. It also served as the dining place for the Prytaneis who were fed here at the public’s expense.

I’m imagining a scene from Game of Thrones of the Bloody Wedding- long tables unnecessarily crammed with food, and live folk bands playing wildly. Women in long woolen peplos adorned in gold jewellery, entertaining drunken men. And a professed king at the high table, looking down at his intoxicated nation. It’s just all crazy.  Tholos must’ve been one heck of a place.

I’d grew tired of being in the sun at this point, so 45 minutes into this trek, I left the crowd. Close by was the Acropolis of Athens, my next stop. I could’ve taken the walk in hindsight, but the 18 minute taxi journey was BY FAR the best few minutes I’d had the whole day. It wasn’t until I’d actually sat down in the taxi that I realized just how exhausted I was.

We arrived and I asked Pablos, my aged driver, to stay for another 5 minutes. He kept the meter running and I sat back. I had a habit of going to Trafalgar square in London, and simply sitting back to observe scurrying people hurriedly live their lives. Here, now, I was doing the same. Young, old, busy people in their own heads living their own little lives, so laissez-faire. It was quite refreshing in a way.

I took a deep breath, grabbed my suitcase and made my way out.

An hour and 30 minutes into Athens and I was at the Acropolis. The term Acropolis literally means hilltop, and is the most significant one in all of Greece. It housed many ancient buildings of great architectural significance, the most famous being the Parthenon. I didn’t know any of this stuff myself so I won’t pretend like I’m an expert – the Greeks have kindly placed boards of information all around the entrance from the main road. Saved me quite some time having to go through my little Smiths tour guide book.

Taking out my trusted camera, I walked to the rocky outcrop and found a perch to view the city. You know the moments that simply take your breath away- no words to illustrate them; no emotion to express… this was one of those. I was quite literally, ontop of the world.

I sat still. In that moment, an absurd feeling washed over me. I’ll never forget it. I almost shivered as goosebumps ran down my spine. Almost whispering, I broke out into a familiar hymn Mr Thompson once taught us in Primary school. Quite fitting really.

The Carpenters- Ontop of the world.

In that moment alone- sitting on the highest point of Athens, looking at the city basked in a gorgeous afternoon glow, I felt grateful. The horizon was so far out, everything between us packed with silhouettes and shapes of buildings, structures and busy roads.  The city was buzzing with life, and the entire thing felt surreal.

In all honestly, I did pick this place for the views. I took a few more pictures and made the long walk down the hill towards the main road again.

From here, another short taxi ride away was the Monastiraki flea market neighbourhood with traditional souvenir shops, retail boutiques and customary stalls to please any heart’s desire.

I walked around, not really looking to purchase anything and instead, went to check out the Tsisdarakis Masjid. Legend has it, the governor that built this mosque back in 1759, used one of the pillars from the Temple of Zeus to make lime for the building… but I mean, who knows for sure? I couldn’t get inside as it was closed for some reason, or perhaps I didn’t find the right door. The mosque by definition was definitely of Turkish influence with its architectural style and design. I loved it- majestic in its stature yet gentle and welcoming in its presence.

I’m hungry at this point, the rumbling in my stomach a constant reminder. Since I haven’t sorted out my mobile data for this country just yet and wifi isn’t an option, I don’t know where to find Halal food. My options are fruit and fries. I don’t mind. I need something hot though, and walking past stalls and stalls of lamb, poultry and pork, I found a ragged, aged greek woman frying fish and potatoes- for tourists less inclined to meat or greek cuisine I guess. I purchased my lunch and two cans of Orange Juice and looked at the time. 4:10pm.

The last leg of my flight was in 1 hour 30 minutes. I stopped a taxi new-york style and proceeded to the airport to catch my flight. It began to rain, I was relieved.

Athens, you were kind to me.

2 thoughts on “Tarriance in Athens, Greece: My 6 Hours” 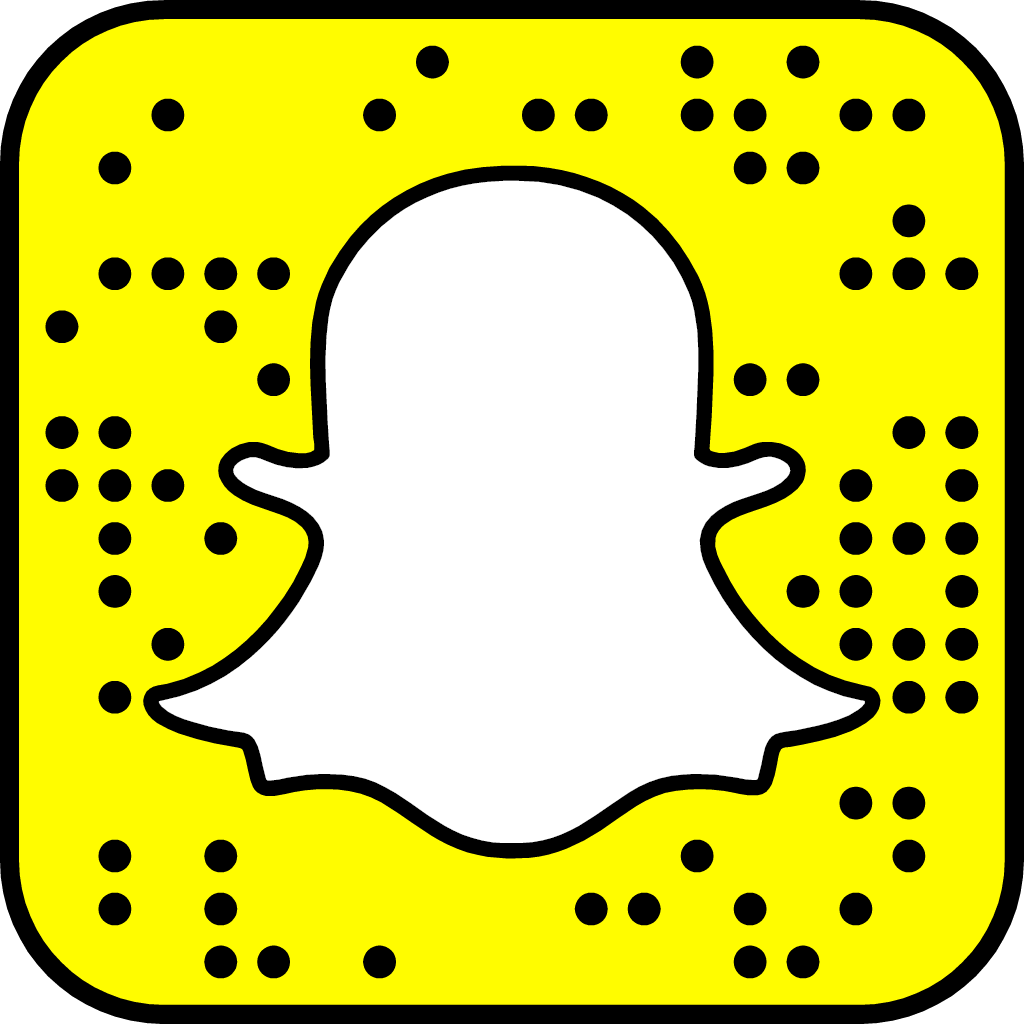